The ABC-MAUS project, which expands the NBC information system of the Austrian Armed Forces with essential new features, is currently in the evaluation phase. Experts from the Cyber Security and Defence Research Group of the DIGITAL Institute participated in a tabletop exercise conducted at the ABC Defence Centre. 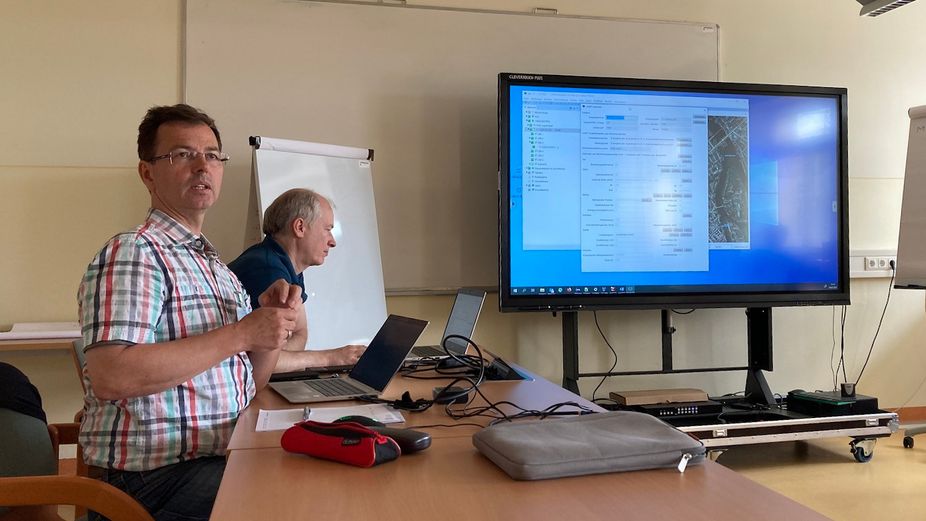 Dangers emanating from released chemical, biological and radiological substances, as well as from radioactive fallout after nuclear detonations (briefly summarised under CBRN) pose a great threat potential. The Austrian Armed Forces must be prepared for these threats.

ABC-MAUS, a project funded within the framework of the Austrian Defence Research Programme FORTE, is an essential development step for the capabilities of the Austrian Armed Forces in the management of CBRN events. ABC-MAUS combines the NBC information system (ABC-IS) developed on behalf of the Austrian Armed Forces at the DIGITAL Institute with warnings of unobserved nuclear detonations based on geophysical measurements, small-scale and large-scale model calculations of atmospheric dispersion modelling at the current state of research, developed and adapted for ABC-MAUS by the Central Institute for Meteorology and Geodynamics (ZAMG), as well as with rapidly deployable sensor networks developed by GIHMM GmbH.

The results of the ABC-MAUS project were evaluated during a tabletop exercise at the NBC defence centre of the Austrian Armed Forces (Dabsch Barracks, Korneuburg). The scenario chosen for the tabletop exercise contained, on the one hand, a small-scale event involving the release of a hazardous chemical substance in the vicinity of the Austria Center Vienna with potential danger to conference visitors, and, on the other hand, a large-scale event involving an unobserved but geophysically detected large explosion on the earth's surface, possibly caused by the detonation of a nuclear weapon, and consequently a possible danger to Austrian personnel abroad. For the latter, ZAMG generated a warning message based on data from the recent past (explosion in a warehouse complex in Beirut harbour in August 2020) and transmitted it electronically to the NBC-IS. For the automatically generated event, a large-scale model calculation was requested electronically using the FLEXPART product on powerful ZAMG computers. The result, which was available after about twenty minutes, was transmitted back to ABC-IS and presented to the technical staff for further evaluation and as input for the creation of a hazard area message. The process was repeated later (assumed time jump to take into account the required assessment of the data from the geophysical measurements by ZAMG experts) with the values of an updated warning message. For the calculation of the area endangered by the small-scale event, the product LASAT of the engineering office Janicke integrated in ABC-IS was used in a local installation with calculation parameters prepared by ZAMG. Calculations were carried out with and without consideration of built-up areas and compared with the results of existing methods.

The new possibilities for the information management of CBRN events added by ABC-MAUS were assessed positively throughout by the demand side during the implementation of the tabletop exercise. The Lagrange methods now available for the ABC-IS offer a significant improvement in the delineation of endangered areas compared to the methods used so far, for small-scale events now also taking into account terrain and buildings. The graphical comparison option on the CBRN situation map with playback function of the temporal development of the predicted spread of hazardous substances is considered to be an essential support for the technical personnel. The backward modelling based on measurement results to find possible release sites of unobserved small-scale events is seen as a "missing link" for the efficient use of mobile resources (manned or also remote-controlled) to delimit contaminated areas.

The ABC-MAUS project is funded within the defence research funding programme FORTE by the Federal Ministry for Climate Protection, Environment, Energy, Mobility, Innovation and Technology (BMK).