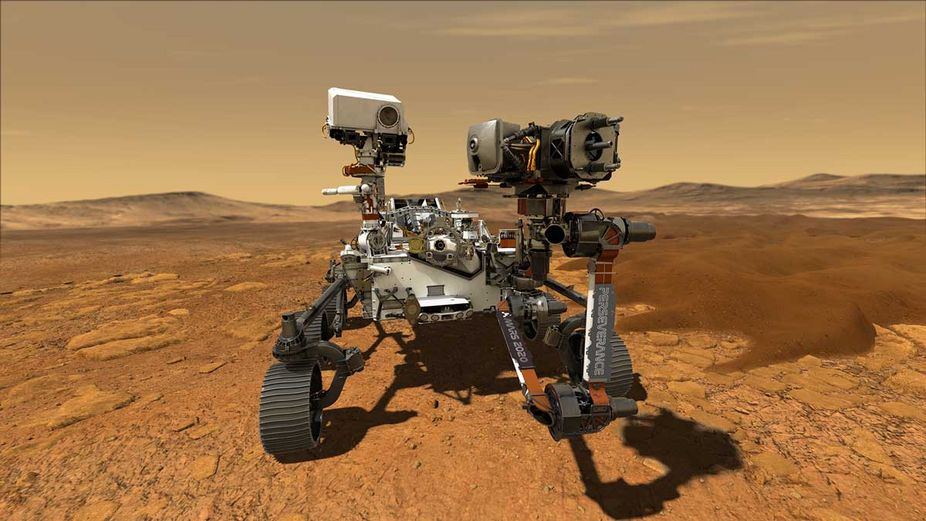 The unmanned Mars rover named Perseverance, which weighs around 1000 kilograms, is part of NASA's Mars Exploration Programme. Its purpose is to study the planet's geological processes, climate and history in more detail. The rover carries seven scientific instruments and a 1.8-kilogram helicopter drone for initial flights in the thin Martian atmosphere.

The launch and flight of the probe went smoothly

"Immediately after launch, there were brief communication difficulties because the radio signals were too strong for the receiving equipment on Earth due to the proximity of the spacecraft. This is a well-known problem with such missions," says Gerhard Paar, a Mars expert at JOANNEUM RESEARCH. He has been accompanying research for Mars expeditions for many years.

The main camera on the Mars rover

JOANNEUM RESEARCH and its DIGITAL Institute are involved in the development of Mastcam-Z, a stereoscopic camera system with zoom lenses on the rover. Together with VRVis, the 3D processing and visualisation mechanisms that will generate the 3D models for geological interpretation from 2021 to 2022 were developed within the framework of an ESA-PRODEX contract. The scientific lead for Mastcam-Z is Professor Jim Bell (Arizona State University). Gerhard Paar from the DIGITAL Institute of JOANNEUM RESEARCH is co-investigator.

The Mars Rover has been in space since July 2020. What happens after the landing on 18 February?

Immediately after the landing, which will take place by means of a "sky crane", the rover will already be standing on the surface of Mars, separated from all landing aids (heat shield, parachutes, braking rockets, sky crane). The rover team will spend the first few days testing the systems and instruments, switching the software from landing mode to drive mode, determining the exact landing site, setting up the communication channels to Mars satellites and Earth and taking the first images of the surroundings.

"These images will then also already be available to us for 3D evaluations and visualisations. We expect the first 3D evaluations about a week after landing. Real scientific evaluations will only be possible when the rover has moved a few dozen metres away from the landing zone after about two weeks. Only then can chemical and mechanical damage to the surface by the Sky Crane rockets be ruled out," Paar explains.

JOANNEUM RESEARCH's software provides three-dimensional evaluations to the Mastcam-Z science team. "These are 'textured point clouds' as well as visualisations of them such as videos that simulate a flyover and thus illustrate the spatiality of the landscape around the rover. For the 3D analysis of the data (e.g. for 3D measurements and geological annotation) by the Mastcam-Z team, the Vienna Centre for Virtual Reality and Visualisation (VRVis) has provided a 3D viewer as part of the Austrian contribution (PRo3D, see www.pro3d.space or also PRo3D Demo on 11th Jan 2021 - YouTube).

"A few weeks after the landing, it is planned to install our evaluation software directly on site at the Arizona State University science team, so that delays due to data transfer will be minimised. Preliminary data will most likely be made available to the public in a timely manner. Raw data and so-called 'calibrated data', which computationally package the peculiarities of the camera instrument into objective measurement data, are typically made publicly available for academic use after a few months," Paar continues.

What do the researchers expect from the evaluated data?

They are manifold and range from new insights into possible past life on Mars, such as evidence and evaluation of possible prehistoric occurrences of water on the surface, or characterisation of the climate and geology, to preparation for manned Mars missions. The Austrian evaluations will support the 3D surveys in particular.

"The goal is to create three-dimensional maps for further research, in which the data from the surface instruments can be localised and interpreted in their interaction," summarises the Styrian Mars expert Paar.

3D evaluations of the image data

The Austrian activities will continue until the end of 2022 with 3D evaluations of the image data up to visualisations. Scientific support is provided by Prof. Christian Koeberl (University of Vienna and Austrian Academy of Sciences), an impact specialist, as well as partners from Great Britain (Imperial College London), who interpret the 3D data geologically and exploit it academically in publications together with JOANNEUM RESEARCH and VRVis.

In addition to the cameras and other sensors, Perseverance also has containers on board that will be used to collect soil samples from the surface of Mars in scientifically promising areas. These sample tubes will be sealed with a highly complex mechanism and deposited at suitable locations on the Martian surface to be collected years later by the "Sample Fetching Rover", a European contribution to the "Mars Sample Return" mission, for transport back to Earth.

"Our 3D evaluations and visualisations will also help to identify and characterise areas of interest for such sampling," says the mathematician Gerhard Paar.

The Austrian contribution to the Mars 2020 mission is funded by the Federal Ministry for Climate Protection, Environment, Energy, Mobility, Innovation and Technology (bmk) through a contract with the European Space Agency ESA.