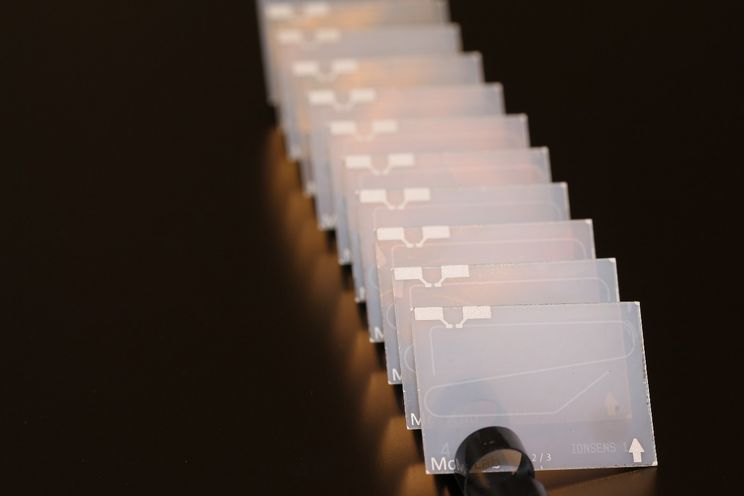 "One advantage of lab-on-a-chip systems is that they allow the automated implementation of complex analyses even in small laboratories with relatively limited technical equipment," said Smolka in the interview. These systems thus enable so-called point-of-care diagnostics. "Meanwhile, compact and portable devices are available, which enables decentral modern diagnostics, for example at the doctor's office. So the medical samples don’t need to be sent to laboratories," said Smolka. Hence, the results are available after hours or even minutes rather than days, which is a decisive advantage.

Previous research work has already led to products for DNA-based diagnostics. Dr. Smolka explained in the interview: "Lab-on-a-Chip systems enable the rapid detection of characteristic sections of the genome of pathogens. The lab-on-a-chip takes up the sample liquid to be examined in a microchannel network with a detection chamber; in this chamber, DNA sequences of the test molecules are identified which, for example, indicate the antibiotic resistance of the tested bacteria.” The commercial lab-on-a-chip-based test platform developed by the Upper Austrian company GENSPEED Biotech, a partner of JOANNEUM RESEARCH, thus enables the detection of antibiotic-resistant bacteria. The results are available in less than 100 minutes - an enormous time saving compared to laboratory measurements, which take 24 to 72 hours.

For a broad commercial success of these novel chips, work is currently underway on a production platform for lab-on-a-chip diagnostics. The aim of this platform is to produce the chips on polymer films using continuous roll-to-roll processes, thus enabling parallel processing of many chips. Consequently, the chips no longer have to be processed as individual parts, but can be produced in large quantities. “We are currently pursuing this further development of this production platform within the framework of national and EU-funded projects. Recently, we received the grant for the EU project NextGenMicrofluidics, coordinated by us, with 21 European partners and total funding of approximately 15 million euros," Smolka states.

When asked what he would develop with unlimited research resources, Dr. Smolka said that a very useful project would be the development of a lab-on-a-chip system that would allow general practitioners to identify infectious disease pathogens within minutes. "This is a task we would very much like to focus on," said Smolka.

More information on this topic will be available on 11 May 2020, 15:00 – 17:30 CEST, in an EPIC Online Technology Meeting on biosensors. In this meeting, the speakers, one of them Dr. Martin Smolka, will discuss the technologies required for the production of biosensors and lab-on-a-chip systems. An indirect participation in this meeting as listener is possible LIVE via the EPICPhotonics YouTube channel.