First field tests of the PyzoFlex® sensors on snow showed that the piezoelectric sensors work reliably even under extreme conditions such as cold, wind and high humidity.

The two funded projects Smart2Go and Digital Motion aim, among other things, to provide skiers with relevant information about the skis’ condition as well as performance feedback. This information has a positive impact on both the safety of the skier and the product lifetime. Now,  JOANNEUM RESEARCH MATERIALS in cooperation with ATOMIC, Salzburg Research and the University of Salzburg has been able to test the PyzoFlex® sensor system directly on snow in the ski resorts Grosseck/Speiereck and Obertauern to generate the relevant information.

The PyzoFlex® sensor system, which was developed by JOANNEUM RESEARCH, was laminated onto the ATOMIC skis as part of the H2020 Smart2Go project to provide online measurements during skiing. Digital Motion project is using this PyzoFlex® sensor system laminated on skis for the measurement of various parameters and their biomechanical interpretation is provided to the users.

“The first field tests on snow were successful with good performances in terms of waterproofness and no failure of the sensors and electronics. The data acquisition was working well”,

said Helmut Holzer, Director for Anticipation & Advanced Research at ATOMIC. He is convinced that these tests are important first steps to identify points to be improved and to define the next steps, until the full integration of the components into the skis.

In Smart2Go project, the PyzoFlex® sensor system provides the online measurement during skiing, while the required energy will be supplied by the Energy Supply Platform (ESP). The ESP includes energy storage and harvesting elements, electronics, and communication components, fully integrated into a miniaturized, flexible platform to be fully integrated into the skis. The ESP is developed in collaboration with the Smart2Go partners. 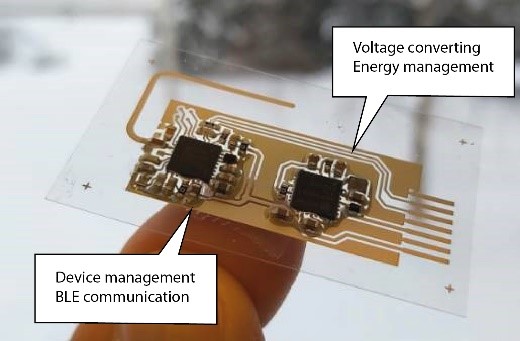 About Digital Motion in Sports, Fitness and Well-being

The aim of Digital Motion project is to provide motion data intelligence for applications under real conditions. In particular, the sensor system developed in Smart2Go is used for the measurement of various parameters and their biomechanical interpretation is provided to the users.

The project Smart2Go receives funding from the European Union’s Horizon 2020 research and innovation programme under Grant Agreement No. 825143.

The COMET Project Digital Motion is funded by BMK, BMDW, and Land Salzburg within the framework of COMET - Competence Centers for Excellent Technologies. The COMET pro-gram is run by FFG.