The project Redundant Robot Control (RedRobCo) focussed on stationary and mobile redundant serial manipulators in the context of human-robot collaboration and robot safety.

As regards content, the project was organized in three parts:

Within the project RedRobCo, we were dealing with robot systems that have more kinematic degrees of freedom than necessary for the execution of a planned task – kinematic redundancies are therefore present. The research focus of the project was on the utilization of these redundancies in order to be able to consider and optimize not only the actual main task (generally a motion task of the tool mounted on the robot) but also further constraints (e.g., obstacle avoidance, singularity avoidance, maximum precision/force, minimum energy consumption, minimum execution time, optimal force estimation).

In addition, the project aimed to investigate the instinctive use of human redundancy. This behavior had been learned through many generations and over thousands of years. Therefore, findings about those criteria that unconsciously influence our choice of the optimal posture will have great potential to use it in robotics in the future. A simple example is the comparison between writing on a board and inserting a screw into the wall. Since less strength is required for writing but a high degree of accuracy, an arm position in which the elbow is close to the body is usually chosen here. When screwing, the focus is on the effort required, i.e., an arm position is preferred in which the straight line between elbow and wrist corresponds to the desired direction of force.

The generated knowledge about natural redundancy utilization was transferred to robotic systems. The redundant serial manipulators KUKA LBR iiwa with 7 degrees of freedom and Schunk 9-DoF LWA with 9 degrees of freedom were available for this purpose. Especially the global redundancy resolution was of great interest in RedRobCo. While only a small area of the solution space around the current robot configuration was considered for planning of further movements, in the course of the project the necessary basis for the consideration of the entire solution space was to be created. By developing and using such global methods, reaching and remaining in local minima could be avoided. This represented a very important step in robotics research. 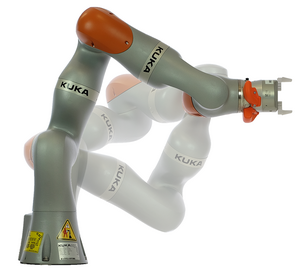 Movement of the KUKA LBR iiwa at the redundancy circle
Photocredit: JOANNEUM RESEARCH 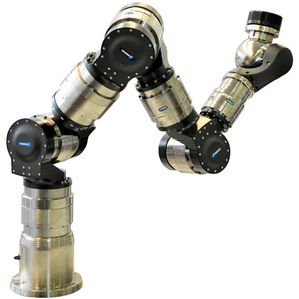 An equally important research content of this project was the utilization and handling of redundancies in mobile manipulators, which represent a combination of serial manipulator and mobile platform. Here we decided whether a change of the end effector position was to be achieved by (1) movements of the robot arm, (2) of the mobile platform or (3) by a combination of both. Examples of decision criteria included the achievable accuracy of the motion execution and chassis-related mobility restrictions of the mobile platform. Also in this case inspiration could be found by analyzing the human behavior: If we want to work on an object further away from us, we first use our legs to get close to the object. The positioning is not very precise, but this can be easily compensated with the hands, as long as we detect these deviations with our sensory organs. Conversely, according to external forces acting on our hand we typically react with our arms first, before we move our torso or our legs. 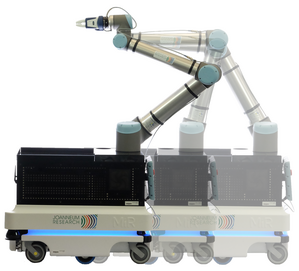 Movement of the null space of the mobile Manipulator CHIMERA,
Photocredit: JOANNEUM RESEARCH

The following mobile research platforms were used in the project:

The mobile manipulator called "CHIMERA" consists of the mobile platform "MiR100" from Mobile Industrial Robots ApS, combined with the serial manipulator "UR10" from Universal Robots A/S. As a prototype, this mobile research platform offers the possibility to develop and test new algorithms in the laboratory. One challenge was the limited mobility of the mobile base due to the differential drive.

This mobile research platform was developed in-house and, thanks to its modular design, allows any wheel combinations and different arrangements. While the variant with exclusively omni-directional wheels permits arbitrary movements on the ground plane, the combination with steered standard wheels entails restrictions. The realization of a full-body compliance control, as well as the handling of the different accuracies during the execution of movements of the mobile platform and the serial manipulator were the focus of research. 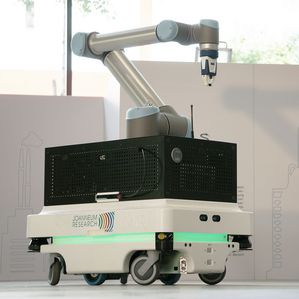 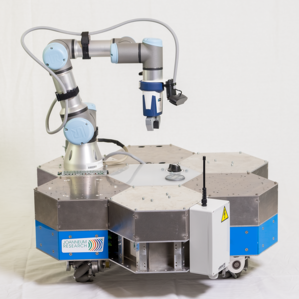 The following project-related publications have been published:

Funded by the Federal Ministry for Transport, Innovation and Technology within the framework of the sponsorship agreement formed for 2015-2018.