In Tridec (09/2010-10/2013), new real-time enabled architectures and tools have been developed to handle crisis situations and to avoid damage or negative effects so far as possible by making suitable decisions. The key challenge was to conceive and develop an open platform for interoperable services that enables the intelligent, event-driven management of very large volumes of data and divergent information received during crisis situations. The focus of the work was to make new models and design the associated real-time performance algorithms for the monitoring system. The package also includes an appropriate system configuration with a secure communication and analytical infrastructure.

The technological approach has been demonstrated in two fields of application, both of which are characterized by the occurrence of extremely large amounts of data.

The first application scenario places the focus on crisis situations, such as may occur while opening up a substrate by drilling. For a geologist, this is an extremely important, but very expensive method of disruption. Drilled holes are permanently monitored using sensor networks and drilling disturbances are quickly identified. During Tridec, especially new analytical methods for the detection and avoidance critical situations while drilling were developed. This includes, for example, the detection of stuck-pipe situations as well as the formation of proposals to implement crisis-avoiding operations (e.g., ream & wash). 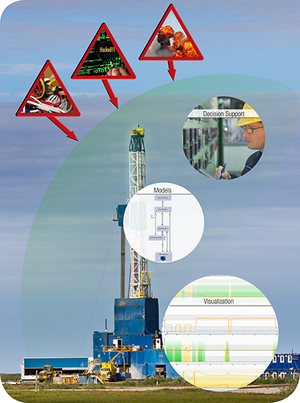 The second application scenario focused on the management of crises caused by natural disasters. An artificially generated tsunami scenario set in the Mediterranean serves as an example.