The official (virtual) opening of the newly designed Human Factors Laboratory of JOANNEUM RESEARCH took place on 23 October under the motto "The human being in the mirror of ergonomics and innovative digital sensor technology". 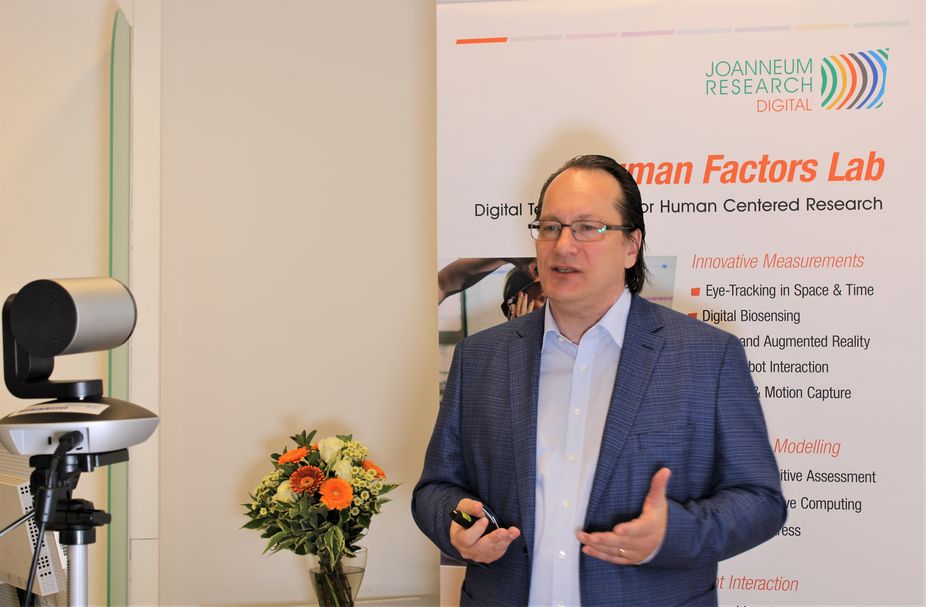 “Human Factors" refers to a holistic view of the mental and cognitive abilities of humans. Research focuses on the interaction between these factors and an increasingly automated world - with the aim of making the interaction as frictionless as possible by optimizing this world. Mistakes are to be avoided, the effectiveness of the human-machine system is to be increased, and a technical environment that can be operated is to be provided for humans, as well as support in everyday life. The "risk industries" such as care, medicine, production, aviation and military need concepts that minimize sources of error, promote safe action and use the "human factor" more effectively.

Due to increasingly more complex systems, the human factor continues to play an increasingly important role. As the engineering concept of the systems become more advanced, the interaction between man, technology and organization, which is also becoming more complex, becomes the focus of central security issues.

The Institute DIGITAL of JOANNEUM RESEARCH has been researching in the field of "Human Factors" for many years and is involved in several international research projects. The newly designed Human Factors Lab combines state-of-the-art measuring instruments with innovative evaluation software for conducting studies in the field of "Human Factors and Ergonomics". With newly developed technologies of measurement and assistance, which provide data about human behavior in an uncomplicated way, the team of Lucas Paletta of the Institute DIGITAL of JOANNEUM RESEARCH, develops digital systems that can provide support for people in stressful situations. These can be emergency services, employees, or even elderly or sick people.

The unique and versatile infrastructure of the Lab was presented in virtual format to almost 100 participants at the opening event on 23 October. Renowned speakers from business and science presented the latest facets of research and application of human factors. The live demonstrations gave the opportunity to take a tour to the Lab, to virtually immerse into the "stress world" of emergency forces, to follow a psychological assessment with mixed reality technologies and to experience the social robot AMIGO as a companion in everyday life.